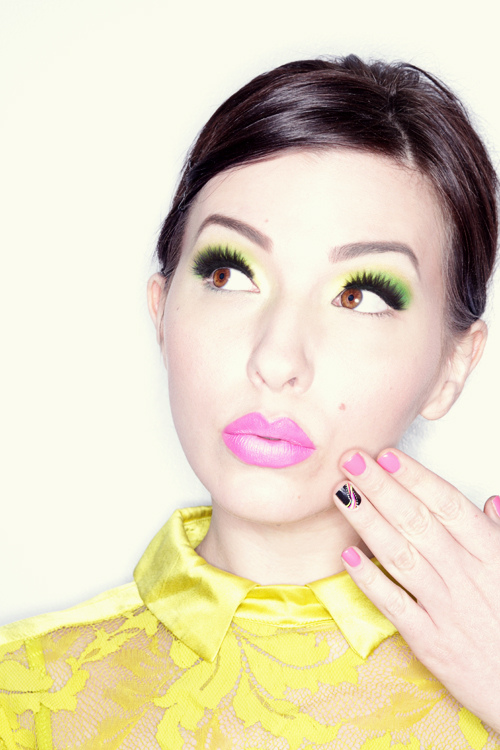 I’ve been meaning to try Sugarpill cosmetics forever, but it seems like every time I would remember to check out the site (which, given my forgetful nature, was admittedly not that often), the products I wanted to try were sold out. That’s usually a pretty good sign, so it made me want to buy them even more. I followed Shrinkle on LiveJournal years and years ago; we were both members of many of the same DIY sales communities, and I always admired her sewing and makeup skills. When she came out with her own makeup line, I had a feeling it would be amazing. And guess what? It is. I’m extremely late to the game, I know! I ordered a couple of palettes, some lashes, and several loose shadows. I haven’t used the loose ones yet (I did swatch them and they’re beautiful) but I wanted to play around with some of the colors for a fun, colorful look. I did something to match my nails, which are still going strong after two weeks – thanks, Amanda! They’re growing out but the polish is still intact, which is pretty impressive since I’m extremely hard on my nails. I had my sister keep my ring finger blank so I could switch it up with stickers. I get bored easily, so it was a good way to keep things fresh. I’ve already gone through three different designs, but this one reminds me of my 80s childhood dreams, so it’s my favorite. Clearly, I wasn’t going for subtlety.