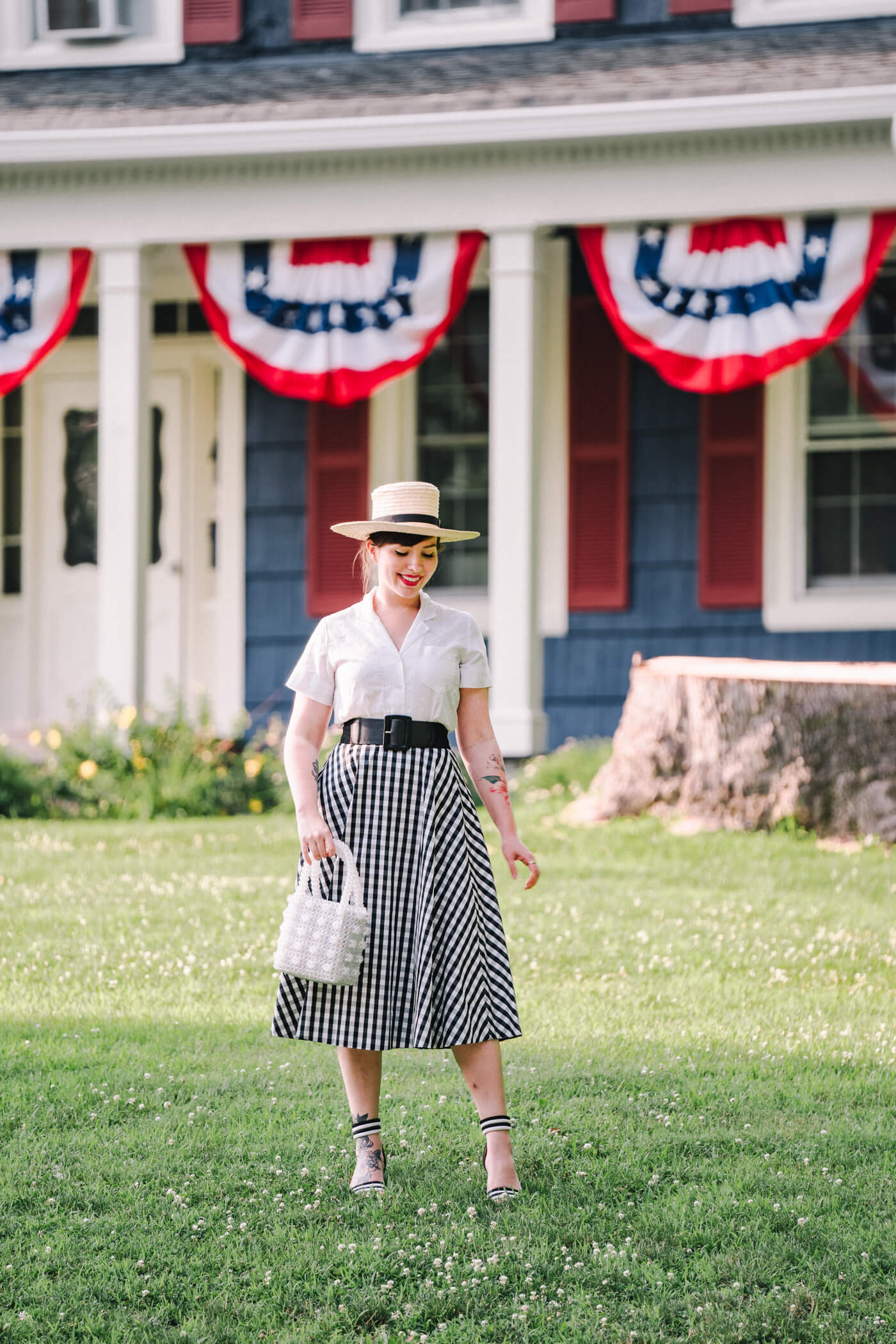 vintage button down shirt (clothing item for my #30wears series)

straw hat — I bought this one at a flea market, but here’s an inexpensive option, and I also love the one I have from Janessa Leone

I guess I have a love for gingham–I have lot more of it in my closet than I realized (see my post: 12 ways to wear gingham). From looking through my blog, the last time I wore this skirt was last year (see that post here), but I’ve actually worn it a lot more frequently than the ol’ blog lets on.

Holding a berry pie and walking around in a gingham skirt and straw hat made me feel like an All American Girl–you know, an All American Girl named Keiko (ha!)–and I had Tom Petty in my head all day. I didn’t bake this pie, but I sure did eat the hell out of it. I bought it at a farmer’s market before we went to a drive in movie. Some people eat popcorn during movies, some people eat pie.

Okay, I also had popcorn.

Back to Tom Petty, though. I don’t often rely on an alarm anymore (I never thought I’d say those words), but I have always preferred to wake up to music instead of that incessant beep beep beeeeeeeep. When I was in high school, I woke up to a song by Lit that started “She wakes up lonely.” I kid you not. It was the late 90s, early aughts, a strange time indeed. I eventually got those very lyrics tattooed on my lower back because we and our computers survived the MILLENIUM, guys, and that song just SPOKE to me. What a time to be alive. I still have it on my lower back. It’s hideous and faded but I’ve never even considered covering it. Maybe one day.

Wait, I forgot to talk about Tom Petty. The songs were rotated throughout the years, with Tom Petty’s “American Girl” and Prince’s “Little Red Corvette” being my most played alarm songs for the past decade, with “Young Turks” by Rod Stewart and “Damn Girl” by Justin Timberlake making occasional appearances. Do I want to be coaxed awake? Little Red Corvette. Invigorated? American Girl. Even though I don’t need an alarm, I still keep it set on a daily basis.

It took me a little while to be able to play those songs again without being sad about their passings, but I’m currently back on my Little Red Corvette kick and I’m forever grateful for Prince and Tom Petty making waking up a little more enjoyable.

Okay, fine. I’m grateful for Lit, too. Don’t ask to see my tattoo.