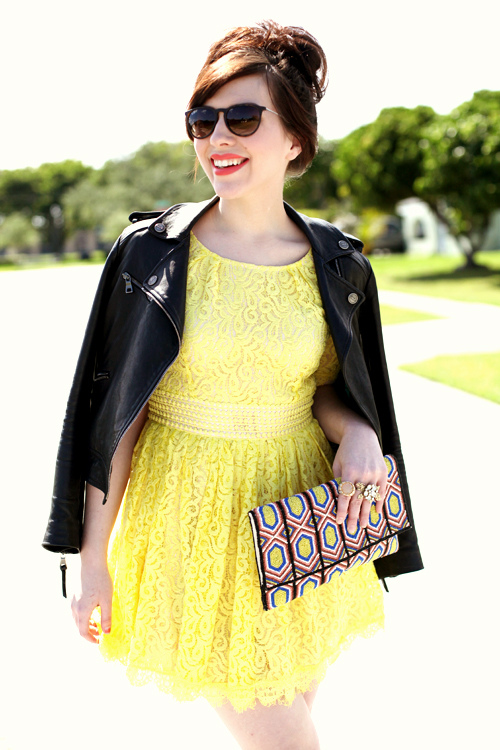 Florida makes me want to wear nothing but brights, splashy prints, and of course, sunglasses. Even when it’s seemingly gloomy outside, the sun is still bright enough to merit shades – hence the state’s nickname, “Sunshine State”. I end up putting sunglasses on every time I step out but can’t wear them without one of two songs popping into my head: “The Future’s So Bright, I Gotta Wear Shades” or “Boys of Summer” (you got your hair slicked back and those Wayfarers on, baby).  It can be a little distracting. But it’s just the way my brain works.

I tend to have a song in my head to go with just about every moment of my life. When I can’t think of one that fits, I make one up (like The “Little Little” theme song that I wrote for a cat I rescued who now belongs to my sister – and not to go off on one of my tangents, but as if on cue, Little Little just jumped up on the bed like a unicorn and meowed). I even like to start my day with a particular song, which is eventually retired and replaced with a new one. Tom Petty’s “American Girl” has been going pretty strong for awhile now, but others have included The Wannadies “You and Me”, Phoenix “1901”, Justin Timberlake “Da** Girl”, The Bird and the Bee “My Love”, Broken Social Scene “All to All”, Michael Jackson “PYT”, Violent Femmes “Blister in the Sun” and a bevy of others. What can I say? I like to wake up with a little bit of happy music.

As for my personal theme song, I suppose it would still have to be “The Prize Fighter” by The Velveteen. Ten years and I still haven’t replaced it. What’s your theme song?