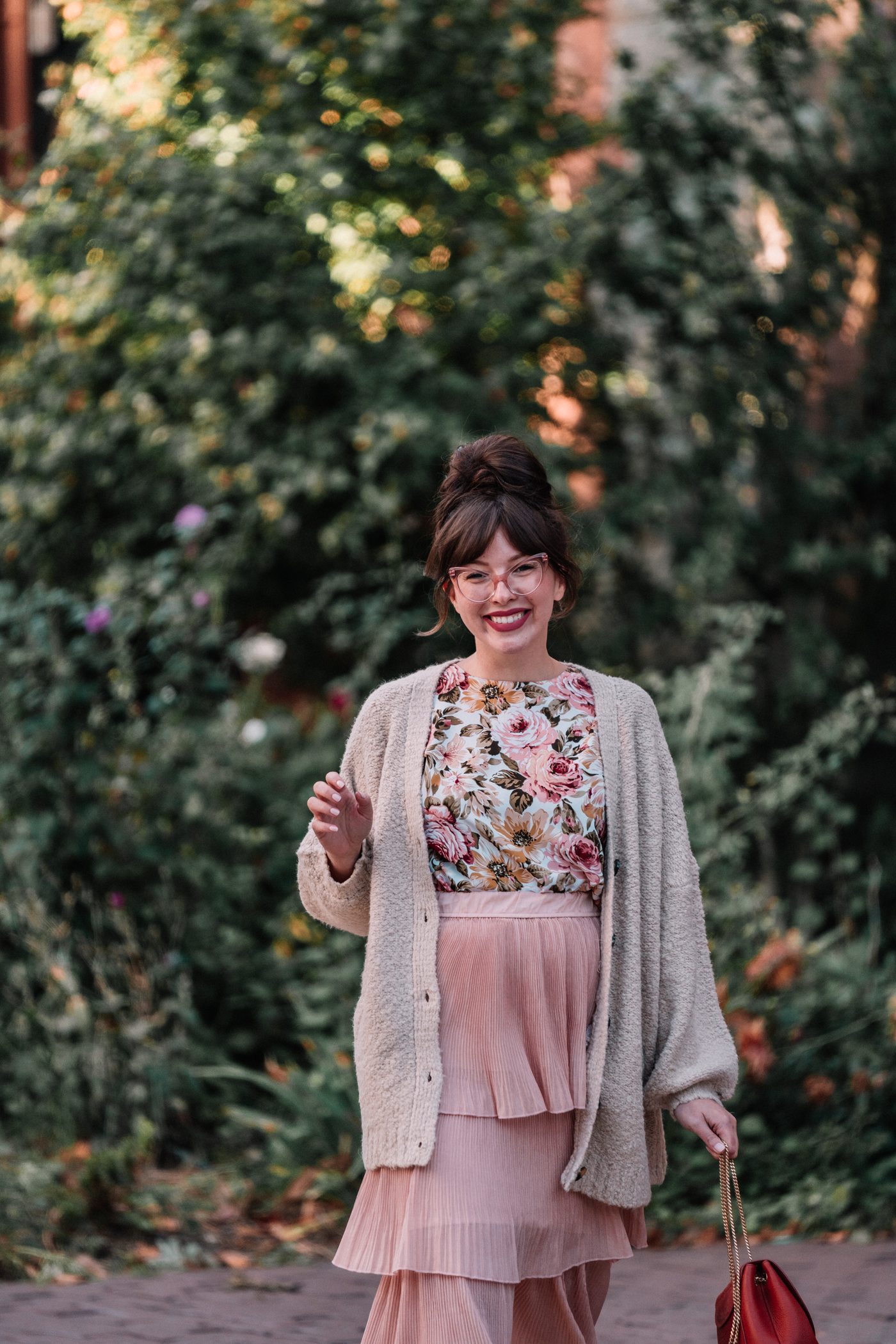 When I was in middle school, I made friends with a girl who was [in my eyes] The All American Girl. While I would be named “Most Unique” in our class superlatives where everyone got an award just for being present (“‘Unique’ is just a euphemism for ‘weird’,” I’d say to anyone who’d listen), she would get “Prettiest Eyes” and “Best Smile” because one award was not enough to praise her classic beauty. She was tan and blonde with straight teeth (some might even say “best smile”); I was pale and brunette with colorful rubber band braces to match the seasons. She was one of three—two boys and one girl in a two-story house—with still-married parents who took them to the beach on weekends and bought her a seemingly endless supply of the the coolest sneakers and BONGO shorts. I was one of four—four girls, one shared bathroom—with a newly re-married, long-time single mom who worked several jobs to give us the things that make kids fit in with their peers. There was one summer where we were inseparable, and I got to have beach days with pre-game slurpees and climb the stairs of their two story house with salty hair and sand in my halter top and boy short two piece suit. Their place was a new build, with a community pool and a Target within walking distance. They had one of those tiny pool tables you win at an arcade after scoring a bajillion tickets! Her mom bought sliced turkey from the deli at the nice grocery store and name brand Coca-Cola. Name Brand. Oreos, too. I’d think to myself, “So this is how the popular people live.” It all seemed so very above my level of bologna sandwiches and Michelina’s TV dinners (though I won’t lie, loved that fettucini).I couldn’t believe she wanted to be friends with me.

We had three good years of sleepovers and horror movie marathons, sharing rooms or seats on the bus on school trips, and even wearing matching shirts and necklaces for our school portraits—the strongest photographic evidence of our bond. We were capital BF Best Friends. But the summer before ninth grade, something shifted. My best friend, already popular and pretty, starting getting noticed more by boys for being popular and pretty. I didn’t mind it (maybe envied it a little) but on our last beach weekend, in which she wore a triangle bikini and met cute twin boys who both gave her their [same, landline] number—a little redundant—I realized we were now living in two completely different worlds. In retrospect, we always had been—but it suddenly felt like a chasm instead of the charming differences of an adolescent odd couple. Where she somehow skipped her awkward years and had boys calling her on the landline all summer, I was still in my multicolored braces and my crush told me I looked like a mosquito. I didn’t take it as a compliment. I don’t think he meant it as one.

Despite the glaring differences between us, we still seemed set for a similar path: we were going to the same high school and had all our academics together, having tested into the same high achieving program. We were still besties—or so I thought—and I was happy to know I’d have a built in friend in our brand new high school. Change was slightly terrifying to me, and I leaned hard on the safety of my constant, knowing that most of my friends would be going to a different school. But somewhere toward the end of our transition from eighth grade to high school freshman, my BFF let me know that my plan was not aligned with hers. We could no longer be friends, because she was going to be a cheerleader. And I, of the “Titanic” movie shirt and glittery retainer wearing variety (a step up from the colorful rubber bands, no doubt), was not. How could I be? I couldn’t even turn a cartwheel.

Her expression said “It’s not me, it’s you,” with equal parts pity and that smug brand of cruelty seemingly exclusive to adolescents. She told me we would just be “running in different circles.” Those circles, The Cheerleaders and The Not Cheerleaders, were not to overlap. Tears were welling up, waiting for their cue to cool my burning hot cheeks, but my pride wouldn’t let them. I wished in that moment that I could blame my red face on an overly enthusiastic blush application. But I didn’t wear makeup yet, and she knew that. Not Cheerleaders like me, we wore lip smackers and the occasional stickers placed next to our eyes. We weren’t much for blush.

The evolution of my reaction to this best friends breakup came in thirds: confusion, self-pity, and guilt.

At first I was perplexed. After the fog of confusion lifted, I started feeling bad for myself. I felt like a loser. I wondered what high school would be like without my best friend, and if I’d make any other friends at all. I thought about the yearbooks that were being passed around, with photos of the two of us in our matching shirts and Best Friends necklaces, with LYLAS (love you like a sister) and BFF written by our pictures. Our shirts were green and blue—the colors of our future high school—and those Best / Friends charms that once symbolized our bond now had a different meaning. It was all too fitting they were halves of a broken heart.

It was very dramatic stuff. I was in middle school, after all.

But then, finally, came the conclusion I would carry with me for years: Didn’t I deserve this? Hadn’t I done the very same to a friend, just two years ago?

The move from elementary to middle school felt like being taken from my warm bed and thrown into an ice cold bath, only there were killer sharks in the bath and they were starving. In short, I wasn’t adjusting well. I felt safe in the comfort of my elementary school, where everyone followed the teacher in a single file line and the only paintings on the walls were of copyright-infringing Disney characters. And then seemingly overnight, those same kids who were just wearing Safety Patrol sashes and asking the little ones to walk, not run! were quite literally running wild in the graffiti filled middle school halls, smoking, cursing, fighting, and generally acting like little terrors with raging hormones. I felt like a small child in a new world of pseudo-adults who felt that growing up meant being as disrespectful as possible. Already going through my own stuff that had me teetering on the edge, I was in dire need of a good friend. I met a couple right off the bat: Lauren, who is still one of my best friends to this very day. And the other one, let’s just call her Jane.

Jane was a nice, quiet girl with outgoing parents who happened to meet my mom at a school orientation. Since I was also a nice, quiet girl, they mutually arranged a play date, or whatever you’d call the 6th grade version of that, and Jane and I became fast friends. I only remember going to her house that one time; she showed me her mom’s Raggedy Ann collection and we jumped on a trampoline. She was much chattier when in the comfort of her own home, and I liked her immediately. I felt chattier around her, too. Her parents were kind to me. They said they hoped to be seeing much more of me. That was our plan, but it didn’t align with my other, newer friends’ plans. And I was overly concerned with my other, newer friends.

I was a homebody and couldn’t even make it through a sleepover without calling my mom in the middle of the night to pick me up, so it’s not a surprise that I didn’t frequent her house. I can’t remember if she ever came over to mine—my visit only stands out because I rarely went to friends’ houses—but we continued our friendship in school. She was such a good kid, the way I was and still wanted to be. She had a high ponytail, freckled cheeks, and innate eagerness to please the teacher. She wore shorts that went to the bottoms of her fingertips, as dictated by the school dress code. She rolled her eyes at boys, because they were still totally gross and not yet crush-worthy. She giggled and blushed at profanity. Except for the high ponytail and the occasional too-short-for-school BONGOs I borrowed from my mom, we were exceedingly similar.

Somewhere along the way, I became friends with some of the more popular girls in our class, and they teased me about my friendship with Jane. They called her a weirdo, a goody two-shoes, and didn’t understand why I would want to be friends with her. At first, I stood up for her—but when I feared that they would turn their teasing toward me, I did something horrible. I phased her out. I stopped asking her to be my partner for projects, and would make sure I had one before she could ask me. I was always “busy” when she asked to hang out. I gave her such a cold shoulder, I never had to tell her we ran “in different circles.” She got the message and stopped trying to be my friend. When I’d walk past her desk, she would put her head down, cheeks rosy with anger, hurt, or maybe embarrassment. I felt guilty, but not guilty enough to make it right. At least, not for almost two years. Like I said, there’s a certain brand of cruelty that seems exclusive to adolescents.

We were in a math class together in 8th grade. I was still friends with the three girls who led to the end of our friendship, but was a decidedly more independent thinker with my wise, 8th grade experience well under way. As soon as I saw her sitting at her desk—front of the class and to the left, a prime spot for optimal learning—I passed her a note that said I was sorry for being such an awful friend and hoped she would forgive me. She read the note, discreetly cast it away, and carried on without giving me a response. And I deserved that. I really did. Even my apology, sorry as I truly was, was self-serving. The guilt was eating me alive, and I was hoping for absolution. She was hurt, and lost her friend to a group of girls who teased her just for being smart and good and pure. She didn’t owe me anything.

It’s easy to feel sorry for yourself when someone is awful toward you. It’s easy to feel like a blameless victim. It’s harder to admit that you, too, have been awful—that in someone else’s story, you have been the villain. But being on the receiving end can be the ultimate catalyst of growth and positive change, if you let it—if you decide then and there that you don’t ever want to be the direct reason anyone hurts the way you do. Or it can make you bitter and cruel. Or listless and uncertain of your worth. Having been that villain myself, I could see it with clearer eyes: we were all little monsters in middle school, still figuring out our own selves, desperate to fit in. I didn’t want to hold that against my once best friend—at least, not forever.

Years later, I received a friend request from her. I wondered if she ever looked back on that moment and made the same decision as me: to leave the little monster behind. To go forward with kindness. I wondered if, as an adult, this friend request was her version of passing a hand-written “I’m sorry” note, long after an apology was necessary.

I didn’t ask. I just accepted. Neither of us are cheerleaders anymore.